Scientism – where am I missing the point? 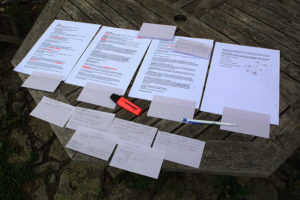 I actually stopped my discussion of research paradigms halfway through because nobody seemed interested. My articles did not attract any discussion or even criticism. I need to share my notes on scientism with you, though, because my interpretation might be completely wrong. I am hoping that some research wizard will point my cognitive dissonance out to me.

Scientism is discussed here as representing the technicity group of paradigms. It is unlikely that researchers using qualitative methodology will adopt this paradigm because it is usually used when quantitative research is conducted. Supporters of the scientism paradigm claim that it is based on the “rule of law of science”.[1] Even so, some scientists do regard scientism as a paradigm that can be used as the favoured assumption when doing qualitative research.

The “rule of science” refers to the prescription of a domain, a set of practices and an attitude to the world. This actually applies to any paradigm because all paradigms are assumptions upon which research is developed. Scientism, it is said, manages the match between the rule of science and the knowledge emerging from the rule, ensuring that the rule adjusts so that it is never too out of sync with what is known. If this is the case, then I cannot see how one can use scientism as your paradigmatic assumption if you follow a grounded theory research design. In grounded theory you are supposed to have an open mind, allowing your data to lead you to conclusions and recommendations. In grounded theory you need to accept your research findings even if it does not agree with what you had in mind. Actually, this should apply to any scientific research.

Scientism, it is said, creates a closed system of knowing that certifies itself by scientific discoveries or evidence that fits its own closed system of paradigm understanding. If the new knowledge does not fit the paradigm, it is usually assumed that there was something wrong with the methodology that produces it, rarely with the paradigm understanding itself. In terms of the nature of research this is a rather risky and questionable point of view, because research should always provide for the possibility that a hypothesis can be disproven, which does not mean that there is anything wrong with the research process, gathered information or conclusions made. It might be possible that not sufficient information was gathered or that the information was not sufficiently corroborated. However, questioning the methodology because you do not agree with the research findings may well be extremely subjective and unscientific.

What do you think? Where am I missing the point?

Why free university education will not work

ARTICLE 7: How to Decide on the Context for Your Ph. D. or Masters Degree Research