In spite of the fact that all learning institutions offering post-graduate studies have policies and procedures for the conduct of academic research, students often find it difficult to figure out how the elements of the qualitative research report fit together. This book explains most, if not all, the intricacies of writing a qualitative research report on master’s and doctoral level. The following topics are discussed and explained:

Dr J.P. Nel, MBL, D. Com (HRM), D. Phil (LPC). Dr J.P. Nel is the owner of Mentornet (Pty) Ltd and Managing Director of Intgrty Publishing (Pty) Ltd. He completed his first doctoral degree in 1993 and his second in 2008. His first thesis dealt with Strategic HR Management of Change and his second with A Strategic Approach to Quality Assurance in Occupationally-directed Education, Training and Development in South Africa. Both degrees were obtained from the University of Johannesburg.

Dr Nel is passionate about strategic management and education and training. To date he has written and published twelve books on topics such as assessment, educational research, quality assurance in education, training and development, learning programme design and development, project management, entrepreneurship and leadership.

Write, talk and teach is a “how to” handbook. It discusses the basics of business communication and the importance of oral communication, and communication theories and strategies. This includes how to write and present, how to set an agenda and write minutes, how to communicate and work in groups, and how to use language to make sense of occupational and vocational learning.

The content is aimed at an introductory level and is not loaded with academic information. Its aim is to be a useful tool to develop language skills which will enable you to communicate effectively in different contexts and environments.

Flip Schutte holds a D Litt et Phil from UNISA, a PhD from the University of Pretoria and a DBL from the UNISA Business School. He is author of a number of books, scholarly journal articles, blogs and popular magazine articles. He is doing fulltime curriculum development for Centurion Academy and he is a post-doctorate research associate at the Gordon Institute for Business Science. He is also a passionate leadership consultant and business coach.

All stakeholders in the world of projects, such as project managers, supervisors, team leaders, contractors and suppliers will benefit from this book. It not only gives insight into the industry of running and managing projects, but it introduces the reader also to the tools necessary to plan, tender and prepare for projects. Work breakdown structures, Gantt charts, network diagram and how to compile and lead a winning team are just some of the essential skills necessary to plan and manage successful projects. Effective project planning and management is a sine qua non for every role-player in the industry.

ABOUT THE AUTHOR
Dr F. Schutte, DBL: PhD; DTh; DLit et Phil Flip Schutte held a PhD from the University of Pretoria and a Doctorate in Business Leadership from UNISA’s Business School (SBL). He lectures Project Management since 2004 and he is a post-doctorate research associate at the Gordon Institute for Business Science. He is also a passionate leadership consultant and business coach.

The first battle of El Alamein book is now available. About this book:

The battle of El Alamein calls to memory the victory of the British 8th Army under command of Lieutenant General B.L. Montgomery over that of Field Marshal Erwin Rommel’s Panzerarmee Afrika during October to November 1942. This battle was decisive, but the eventual outcome was not in doubt as the contribution of American industrial power by that time tilted the balance of power in favour of their British ally, as was the case in August 1942 (battle of Alam Halfa) when Rommel desperately tried for a final time to break through to Cairo and the Suez Canal.

The situation in June to July 1942 is contrasted with the above-named scenario when a demoralised 8th Army retreated from Gazala after being defeated by Rommel’s forces. The skirmishes were initially not named a battle, but as eventually historians realised that what is now known as the 1st battle of El Alamein was the most significant of the three battles during 1942.

All that was needed was that Rommel’s forces had to break through the scattered cluster of British forces near the coast, especially as the 1st British Armoured Division only arrived during the afternoon of 1 July from Mersa Matruh. Thus, the 1st South African Infantry Division with the 18th Indian Brigade with inexperienced troops, faced the might of the German panzers. If Rommel could bypass the South Africans and Indians and reach the open terrain between the station and Alexandria he, master of mobile warfare, would outmanoeuvre the British and capture Alexandria and Cairo and eventually even the Persian Gulf oil fields, knocking the British Empire out of the war.

Rommel’s desperate efforts from 1 to 3 and again on 13 July failed, but the South Africans were in the eye of the firestorm. Gradually the battle developed into a process of attrition which favoured the British. The British commander, general C.J.E. Auchinleck eventually took the offensive, but British doctrine and experience did not yet lend it to the conduct of mobile warfare. Thus, Rommel’s forces were not destroyed. Auchinleck did however, lay the foundation for the British victories of Alam Halfa and the 2nd battle of El Alamein. The events in the battle during the period 1 – 30 July and the South African perspective is evaluated in this publication as a contribution to a better understanding of the North African campaign during the 2nd World War.

Book Published: The Art and Science of Assessing Student Performance

The Art and Science of Assessing Student Performance book is now available. About this book:

Conducting assessment is not just a science, but also an art. Different from the first edition of this book the emphasis in this second edition falls on the following:

The following topics are covered: 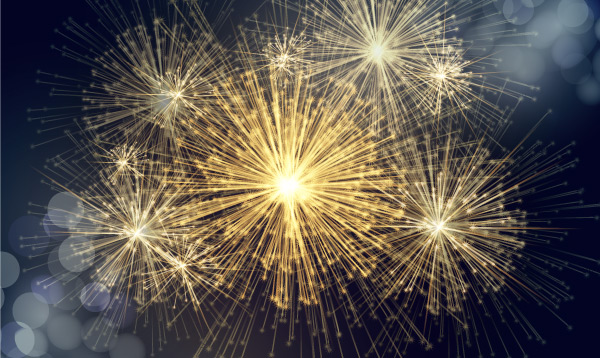 In this tutorial we will have a look at how to register on the iNtgrty website.

You may be asking yourself “Why should I register?” Basically you need to register in order to participate on the website. So if you want to post a comment, reply to a comment or post a news article or discussion yourself then you will have to be registered. If that is what you had in mind then keep reading…

Here are the basic steps you need to follow to register, starting from the iNtgrty homepage (www.intgrty.co.za):

Step 1: Hover the mouse pointer over the “Log in” menu as shown in the image below. 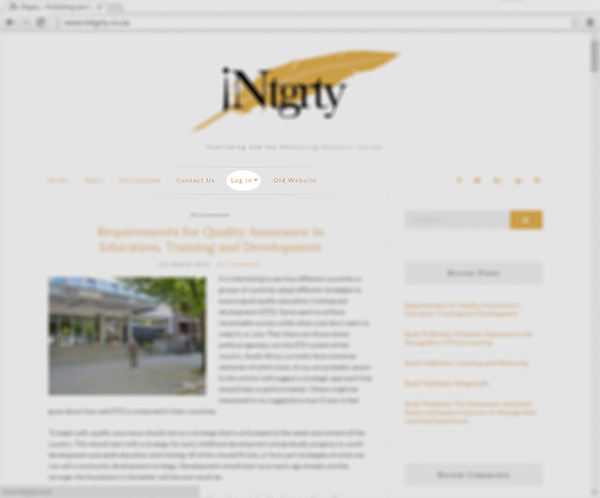 Step 2: The menu should expand, click on the “Register” link as shown in the image below. 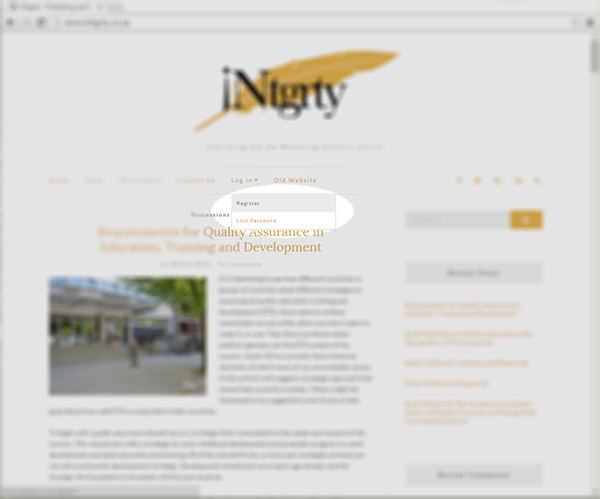 Step 3: The registration page should load, insert your registration details into the form as shown in the image below. 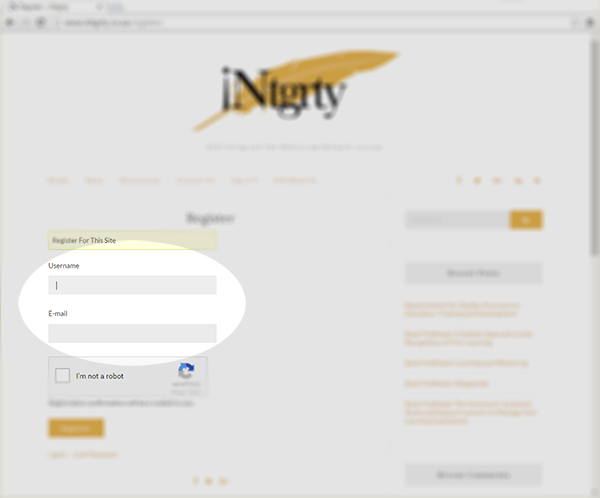 Step 4: Click inside the check-box next to the text “I’m not a robot” as shown in the image below. 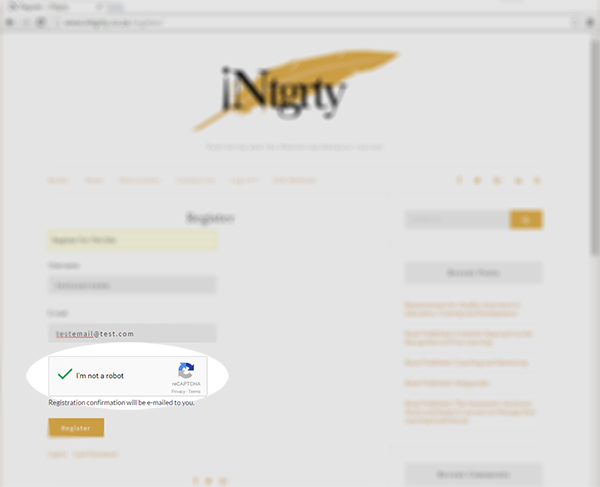 Step 5: Click on the “Register” button as shown in the image below. 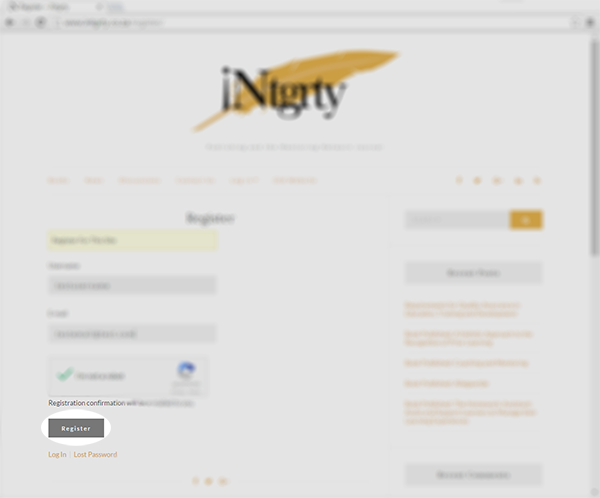 Step 6: The login page should now load. An e-mail will be sent to you with a link, click on the link to activate your account and set your password.

Step 7: Once you open the link sent to your e-mail you will be redirected to the page shown in the image below. The system automatically generates a secure password for you, if you chose to use this password then make sure to take note of it so that you can log in later. Alternatively you can also fill in your own password. 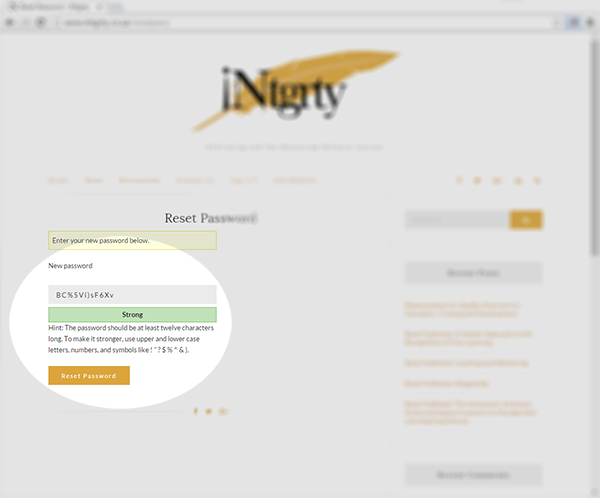 Step 8: Click on the “Reset Password” button, you will be redirected to the login page where you can log in using the details that you have entered.

The A Holistic Approach to the Recognition of Prior Learning book is now available. About this book:

Recognition of prior learning (RPL) is currently enjoying much more international attention than a decade ago. People increasingly realise that RPL is a powerful tool with which to encourage  people to become involved in lifelong learning. Learning institutions now realise that learning does not only take place in a formal setting, but also when people interact socially and when people learn in an informal setting.

The Coaching and Mentoring book is now available. About this book:

Coaching and mentoring are often used as organisational interventions in order to improve performance, foster working relationships, and develop employees (and learners). However, there are many aspects one may not have considered before embarking on the role of a coach or mentor. For example, what exactly is the difference between coaching and mentoring? This book aims to delve into the roles of coach and mentor, provide substantial guidance on meeting learners’ needs, and, at the same time, meeting organisational requirements of quality.